Too Migrant, Too Muslim, Too Loud 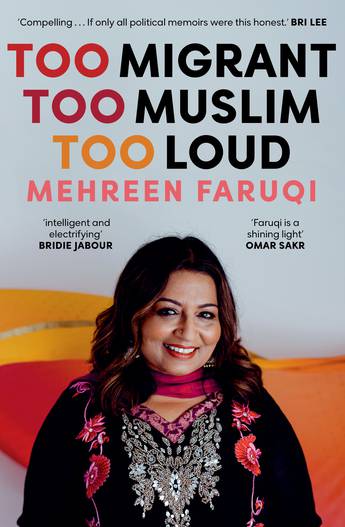 Too Migrant, Too Muslim, Too Loud is a no-holds-barred memoir and manifesto from outspoken senator, trouble¬maker and multicultural icon Mehreen Faruqi. As the first Muslim woman in any Australian parliament, Mehreen has a unique and crucial perspective on our politics and democracy. It is a tale of a political outsider fighting for her right and the rights of others like her to be let inside on their terms.

From her beginnings in Pakistan and remaking in Australia, Mehreen recounts her struggle to navigate two vastly differ¬ent, changing worlds without losing herself. This moving and inspiring memoir shares shattering insights learned as a migrant, an engineer, an activist, a feminist and a politician.

'Compelling . . . If only all political memoirs were this honest.' BRI LEE, author of Eggshell Skull and Who Gets to be Smart

'Faruqi is a shining light' OMAR SAKR, author of The Lost Arabs

'intelligent and electrifying' BRIDIE JABOUR, journalist and author of The Way Things Should Be

'This is the impassioned insider's account of the state of Australian politics by one of our most trail-blazing politicians.' SUSAN CARLAND, author of Fighting Hislam

'An inspiring and powerful memoir by one of the most fiercely principled, courageous and compassionate leaders in this country.' RANDA ABDEL-FATTAH, author of Does My Head Look Big in This?

Dr Mehreen Faruqi is the Greens' senator for New South Wales. She is a civil and environmental engineer and life-long activist for social and environmental justice. In 2013, she joined the NSW Parliament, becoming the first Muslim woman to sit in an Australian parliament. In 2018, she became Australia's first Muslim senator. She has been a passionate advocate against racism and misogyny.

Since emigrating from Pakistan in 1992 Mehreen has worked in leadership positions in local government, consulting firms and as an academic in Australia and internationally. This includes her roles as Manager of Environment and Services for Mosman Council, Manager of Natural Resources and Catchments for Port Macquarie-Hastings Council, Director of the Institute of Environmental Studies (UNSW) and an Associate Professor in Business and Sustainability (AGSM, UNSW).

While in NSW parliament, she introduced the first ever bill to decriminalise abortion. Mehreen has been a leading voice in opposition to the greyhound racing industry, privatisation of public transport, and removal of laws that protect native vegetation. Since joining the federal senate in August 2018, Mehreen has been an outspoken advocate for public education, anti-racism, social housing and animal welfare.