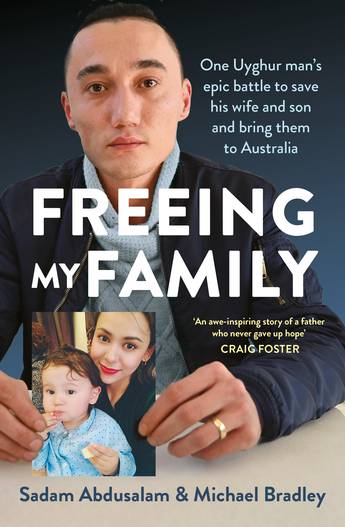 The remarkable true story of a father who moved heaven and earth to help his wife and son escape Chinese persecution and bring them to safety in Australia.

'An awe-inspiring story of a father who never gave up hope of rescuing his wife and son from a genocidal regime' - Craig Foster AM, former Socceroos captain

In a remote area of deserts and mountains where the Silk Road once ran, China has built the world's largest prison. The Uyghur population of Xinjiang is being systematically rounded up, with as many as a million citizens being held in detention. In Australia, Sadam was desperate to keep his wife Nadila and their baby son out of detention, but the clock was ticking.

Sadam came to Australia as a political refugee, settling into the community and becoming a citizen. Then he returned to Xinjiang for a visit and met Nadila. Shortly afterwards, China's government began its massive crackdown on the Uyghurs. Nadila was trapped in Xinjiang, with their newborn son Lutfi.

This is the epic story of Sadam's efforts to reunite his family. For a long time he battled indifference from both Australian and Chinese authorities, but with the assistance of Michael Bradley's legal team the obstacles were eventually cleared. Then came a nail-biting long journey for Nadila and Lutfi. Freeing my Family is an amazing true story with the happiest ending anyone could want.
More books by this author

Sadam Abdusalam is an Australian of Uyghur background. Michael Bradley is the head of Marque Lawyers, the legal firm that took on Sadam's case pro bono. His articles have been published in Crikey, The Saturday Paper, The Australian Financial Review, ABC Online, and The Sydney Morning Herald.