The Country, Attempts on Her Life, The Misanthrope, No One Sees the Video and The Country 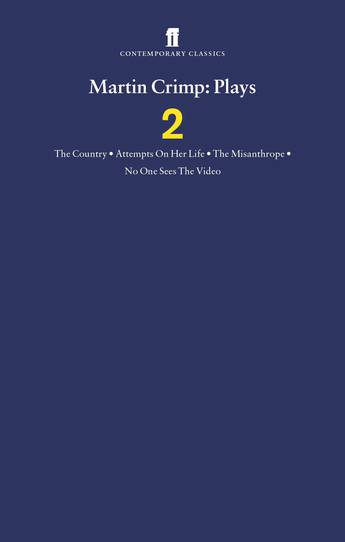 Download cover
Availability: Not available to order from this website, please try another retailer
'Martin Crimp is one of the hottest properties in Europe' Guardian

Attempts on Her Life

'Crimp writes with extraordinary precision. He has discovered a dramatic form that perfectly reflects the violent, disorienting times in which we live.' Daily Telegraph

'This is not just an updating of Molihre's great social tragicomedy but a thrillingly sophisticated modern version of a classical play The writing is cool, sharp and ferociously funny.' Sunday Times

No One Sees the Video

'Crimp's dialogue is spare, edgy, rigorously controlled and often very funny. But beneath the poised surface of the words, he creates a growing feeling of tension, even of menace, of lives of quiet but none the less profound desperation.' Daily Telegraph

'In the modern manner, this is a short, sharp shock, without redemption. In the language of drugs, a hit.' Sunday Times

Martin Crimp was born in 1956. His plays include Three Attempted Acts (1985), Dealing with Clair (1988), Play with Repeats (1989), No One Sees the Video (1991), Getting Attention (1992), The Treatment (1993, winner of the John Whiting Award), Attempts on her Life (1997) and The Country (2000). He has translated or adapted work by Ionesco (The Chairs, 1997), Genet (The Maids, 1999) and Moliere (The Misanthrope, 1996).His work in the UK has been produced by the Orange Tree Theatre, the West Yorkshire Playhouse, the Stephen Joseph Theatre, the RSC, the Young Vic and the Royal Court, where he was writer-in-residence in 1997. In New York his work has been seen at the Public Theater and the Classic Stage Company, as well as on Broadway.