'What I Really Want to Do is PRODUCE...' 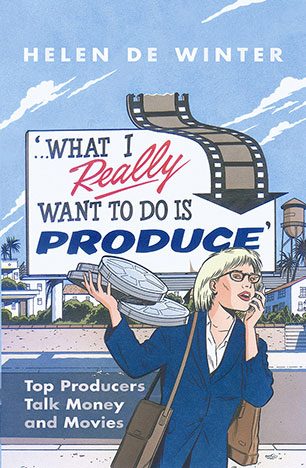 What does a movie producer actually do for a living? Actors, writers, directors, we all know about - but what of that other very prominent name in the opening credits?

Is 'producing' any more than writing cheques and smoking fat cigars? Does a producer attend a movie set for any reason other than to manage 'the three Ts' - tea, toilets, and transport?

Helen de Winter, herself an intrepid young producer, set out to explore the broader meaning of the profession in conversation with some of the most successful names in the business. She discovered a job that is both hair-raising and hair-tearing, that obeys no rules and defies description, and that, on any given assignment, might require the combined skills of a wheeler-dealer, a diplomat, a stern but doting parent, and a clinical psychiatrist.

De Winter met the men and women responsible for The Lord of the Rings and Bridget Jones's Diary, Brokeback Mountain, Reservoir Dogs, and My Big Fat Greek Wedding. And she put to them the burning questions: How do you smell a hit? How do you raise adequate sums of other peoples' money to get a film made? How do you handle feuds, fights, even fatalities on set? And how do you drag the general public off the street to actually watch the fruits of your labour?

The results make enlightening reading, whether your interest lies in movies or money - or whether, indeed, what you really want to do is produce
More books by this author

Helen de Winter has worked in production and post-production on dependent and studio feature films, and freelanced as a script editor for UK and US producers. She produced her first acclaimed short film for FilmFour and BBC Films and has since produced four others. She currently has a television drama in development.