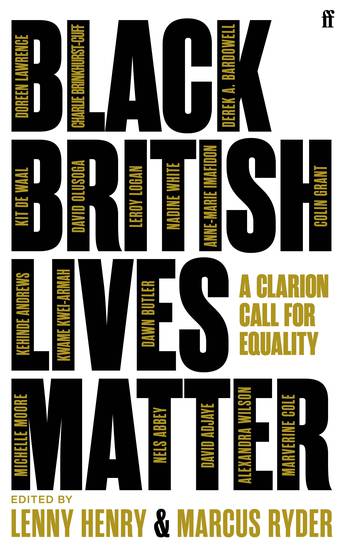 This is more than a book - it's an incitement to change people's perceptions.

In response to the international outcry at George Floyd's death, Lenny Henry and Marcus Ryder have commissioned this collection of essays to discuss how and why we need to fight for Black lives to matter - not just for Black people but for society as a whole.

Recognising Black British experience within the Black Lives Matter movement, seventeen prominent Black figures explain why Black lives should be celebrated when too often they are undervalued. Drawing from personal experience, they stress how Black British people have unique perspectives and experiences that enrich British society and the world; how Black lives are far more interesting and important than the forces that try to limit it.

"I always presumed racism would always be here, that it was a given. But the truth is, it was not always here, it was invented." - David Olusoga

"Our identity and experience will shape every story, bleed into every poem, inform every essay whether it's about Black 'issues' or not" - Kit de Waal

Sir Lenny Henry has been a comedian since the age of 16. He has risen from being a cult star on children's television to one of Britain's best-known and most celebrated comedians, as well as a writer, radio DJ, TV presenter, co-founder of Comic Relief, and award-winning actor. Henry has a PhD in Media Arts and is currently the Chancellor of Birmingham City University, and in was awarded knighthood in the 2015 Honours for services to charity and drama. Henry has also been invited by the UK Government to discuss diversity in the entertainment industry on numerous occasions. Who am I, Again?, his autobiography, was published in 2019.

Marcus Ryder has over twenty-five years' experience working in television and journalism and is a leader on the issue of diversity in the media. He was previously the Chair of the Royal Television Society's Diversity Committee and was the head of BBC Scotland Current Affairs for nearly a decade. He is the recipient of a number of awards for his work, including multiple BAFTA Awards,and recently took up the position of Chair of RADA Council - the UK's leading drama school.