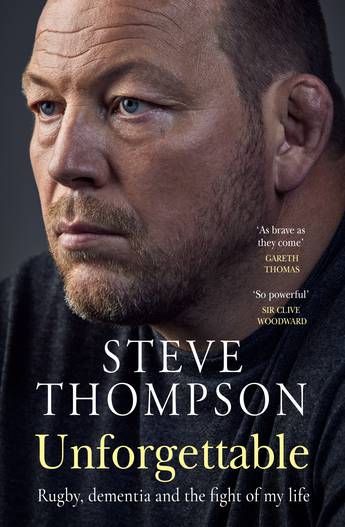 Unforgettable is at once a powerful, affecting sports memoir from a true giant of rugby, and a raw call to arms to safeguard the sports we love and all those who play them.

But the triumphs came at a cost. When rugby union turned professional, Steve was plunged into a game where raw power meant everything. Today, he remembers nothing about playing in that final. In his words, watching the tape back is like watching a ghost.

The years of hurt in an era of professional meat shields, and the culture of sucking up punishment and coming back for more, have taken a terrible toll. Steve has been diagnosed with early onset dementia, and probable chronic traumatic encephalopathy. He is in his early forties. There are days when he doesn't remember the names of his wife and four kids.

But Steve doesn't hate the game of rugby. He wants to change it, make it better, safer for children and young people who don't need to tread the same path. Unforgettable is part sports memoir - with stories contributed by his world-cup winning teammates and his former manager, Sir Clive Woodward - and part affecting, raw human storytelling. In it, Steve will make memories for himself and for his children, and will relive the biggest battle of his life, with his toughest opponent - his own mind.

Despite the constant reminders of what has been lost, and what is still to lose, Steve is as positive and open-hearted as ever. His story is one of hope and courage. Unforgettable stands as testament to the ultimate strength of the human mind - and to a man no longer pushing himself to the limit for competition, but for his own place in the world.
More books by this author

Steve Thompson MBE is a former Rugby Union player and 2003 Rugby World Cup winner. Once England's most capped hooker, Thompson has also played for the British & Irish Lions as well as playing almost 200 matches for the Northampton Saints. The legacy of Steve's life in rugby should be a host of treasured memories. Instead, it is one of trying to recall the names of his wife and four young children. Being lost in a street he has walked down a hundred times. Steve has been diagnosed with early-onset dementia, the result of endless collisions, concussions, and injuries. He is now campaigning to improve the game and safeguard those who play it.