Don't Tell Mum I Work on the Rigs...She Thinks I'm a Piano Player in a Whorehouse 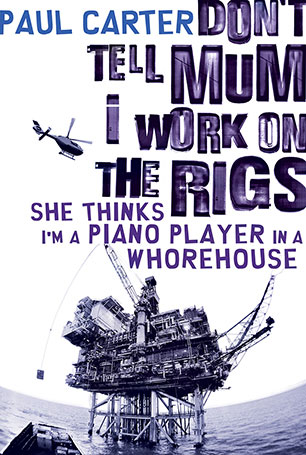 A take no prisoners' approach to life has seen Paul Carter heading to some of the world's most remote, wild and dangerous places as a contractor in the oil business. Amazingly, he's survived (so far) to tell these stories from the edge of civilization, and reason.

'Great two-fisted writing from the far side of hell.' - John Birmingham, bestselling author of He Died with a Felafel in his Hand

'A unique look at a gritty game. Relentlessly funny and obsessively readable.' - Phillip Noyce, director of The Quiet American and Clear and Present Danger

Paul Carter has been shot at, hijacked and held hostage.

He's almost died of dysentery in Asia and toothache in Russia, watched a Texan lose his mind in the jungles of Asia, lost a lot of money backing a mouse against a scorpion in a fight to the death, and been served cocktails by an orang-utan on an ocean freighter. And that's just his day job.

Taking postings in some of the world's wildest and most remote regions, not to mention some of the roughest oil rigs on the planet, Paul has worked, gotten into trouble and been given serious talkings to in locations as far-flung as the North Sea, Middle East, Borneo and Tunisia, as exotic as Sumatera, Vietnam and Thailand, and as flat out dangerous as Columbia, Nigeria and Russia, with some of the maddest, baddest and strangest people you could ever hope not to meet.

Strap yourself in for an exhilarating, crazed, sometimes terrifying, usually bloody funny ride through one man's adventures in the oil trade.

When not getting into trouble on the rigs Paul lives a quiet life in Sydney.
More books by this author

Paul Carter was born in England in 1969. His father's military career had the family moving all over the world, re-locating every few years. He has worked in the oil industry for fifteen years, re-locating every few years (old habits). Paul has lived and worked, gotten into trouble and been given a serious talking to, in; England, Scotland, Germany, France, Holland, Norway, Portugal, Tunisia, Australia, Nigeria, Russia, Singapore, Malaysia, Borneo, Columbia, Vietnam, Thailand, Papua New Guinea, Sumatra, the Philippines, Korea, Japan, China, USA and Saudi Arabia. Today he lives in Sydney with two motorbikes and a daschund named Collin. But who knows where he'll be tomorrow . . .
www.paulcarterauthor.com