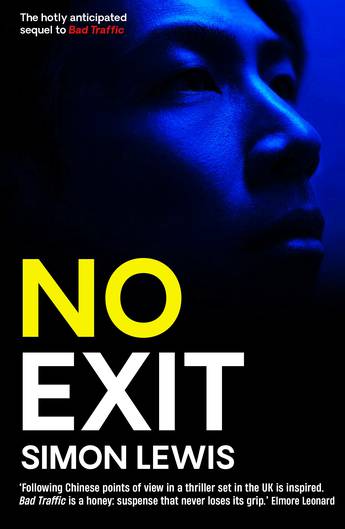 Inspector Jian and his daughter Weiwei just want to go back to their home in China: but Jian is facing a corruption charge in his absence and risks arrest. Instead he tries to scrape a living on London's meanest streets as an illegal immigrant, reduced to hustling Mah Jiang for cash. A bleak future looks to be growing bleaker still when a triad gang blackmail him into tracking down an unlikely young robber.

In No Exit Jian and Weiwei scramble between London's grimiest bedsits and its swankiest penthouses as they penetrate the glittering world of 'princelings' - the rich children of the Chinese elite, who treat the city as their playground. Locked in a desperate struggle, with no way out in sight, It will take all their wiles, as well as some lucky gambles, to come out of this latest venture alive.
More books by this author

Simon Lewis is a Welsh novelist and screenwriter. His novel Bad Traffic which introduces Inspector Jian and his daughter Weiwei was nominated for the LA Times Book of the Year and the French SNCF prize. No Exit is the sequel. Simon Lewis has lived in China and Japan. He currently lives in Brixton, London.