Home>Browse>Books>Children's>Horrible Harriet and the Terrible Tantrum

Horrible Harriet and the Terrible Tantrum 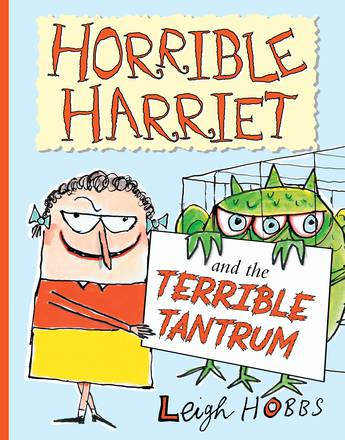 From the incredible imagination of Leigh Hobbs comes an original character and an old friend, in Horrible Harriet's wildest adventure yet.

What's green, has three eyes, and lives in a cage by Horrible Harriet's bed?
And what happens when it goes missing...?

Another extraordinary adventure for Horrible Harriet and you, the lucky reader!
From the creator of Mr Chicken and Old Tom.
More books by this author More books in this series

Leigh Hobbs works across a wide range of artistic mediums, but is best-known for his children's books featuring Old Tom, Horrible Harriet, Fiona the Pig, the Freaks in 4F, Mr Badger and Mr Chicken. Old Tom was also a popular TV series, and Leigh has won every major Australian children's choice award. Mr Chicken Goes to Paris was shortlisted for the Prime Minister's Literary Awards, is a bestseller at Paris's Louvre Bookshop, was adapted for the stage by NIDA, and was shortlisted for the CBCA Awards - as were Horrible Harriet and Old Tom's Holiday. Horrible Harriet appeared at the Sydney Opera House in 2017. In 2019, Leigh was one of five Australian Legends of Children's Literature featured by Australia Post on a stamp, and in 2016-2017 he was the Australian Children's Laureate.

For a glimpse into Leigh's studio and creative process - and some tips on how to draw his most famous characters - view his 'That's Me' mini-film series at vimeo.com/leighhobbs.